How Much Economic Productivity Does Lead Exposure Cost the World?
Published on: August 22, 2022

Only accounting for pathways (1) and (3), LEEP’s cost-effectiveness model for its Malawi program estimates that physical health benefits account for approximately 20% of our program’s effectiveness, while income improvements account for the remaining 80%. (For a brief overview of the model see our previous blog post; for a deeper dive refer to the model documentation.)

To better estimate the income effect of lead exposure, LEEP recently updated a key study from New York University (Attina and Trasande 2013) that attempts to quantify the income loss from lead exposure in low- and middle-income countries (LMICs). Combining more recent data with Attina and Trasande (2013)’s methodology, we found that, across 138 LMICs, the lost lifetime expected productivity (LEP)[1]Lifetime economic productivity is defined as the expected earnings of each child over their lifetime. Lost lifetime economic productivity represents the portion of otherwise expected earnings that … Continue reading in 2019 amounted to $906 billion, equivalent to 0.68% of the world’s GDP. Our new estimate indicates a decrease from $977 billion, equivalent to 1.20% of the world’s GDP, as estimated by Attina and Trasande (2013) for the year 2008, using data from 2000-2010.

This post is an introduction to our update of Attina and Trasande (2013)’s study on the economic impact of childhood lead exposure in low- and middle-income countries. Here we outline the update’s results and implications but do not specify our full methodology. For more details see the update spreadsheet and the companion document.

While our cost-effectiveness model shows that lead exposure’s income effect is significant, our understanding of the effect comes with two caveats. First, although the evidence suggesting that lead exposure in childhood reduces IQ – and that IQ and income are correlated in high-income countries – is strong, we’re uncertain about the strength of the relationship between IQ loss and income loss in low- and middle-income countries (LMICs). To account for uncertainty our cost-effectiveness model discounts the income effect by 50%,[2]Rethink Priorities discuss this further in their report on global lead exposure. They write: “Our all things considered adjustment would be to say the annual economic benefits in dollars are 30-50% … Continue reading but this update reports pre-discounting figures.

Second, the absence of up-to-date, reliable, and comprehensive blood lead level (BLL) data for children in LMICs poses a challenge for calculating the size of the income effect. Recall that high BLLs are an indicator of lead exposure, which causes brain damage, thus lowering IQs and incomes; BLL data are therefore a crucial input for estimating the amount of lost income from lead exposure. The most recent attempt to quantify income loss from lead exposure across LMICs (Attina and Trasande’s 2013 study), however, relies on BLL studies from 2008 or earlier.

To better understand the size of income effect, we updated Attina and Trasande (2013) by applying the original methodology to a more up-to-date set of BLL data and national accounts statistics. The potential for this magnitude estimate to have fallen out of date, for any given country, is huge: either GDP or average BLL, or both, could have changed dramatically in the intervening decade. Further motivating this mini-project was the potential for new data from the intervening period to update our view of the absolute (i.e. compared to other global health interventions) and relative (i.e. country-to-country) cost-effectiveness of LEEP’s programs.[3]We conducted a cost-effectiveness model sensitivity analysis earlier this year to investigate which model inputs had a greater effect than others on the overall cost-effectiveness of LEEP’s Malawi … Continue reading

A new estimate of the economic cost of lead for LMICs

To update Attina and Trasande (2013), we first developed a spreadsheet containing all the world’s LMICs, as defined by the World Bank for the years 2020–21 (based on 2019 GNI data), to reconstruct the study’s methods. We then populated our spreadsheet using data inputs from the University of Washington’s Institute for Health Metrics and Evaluation (IHME) for BLL data, the World Bank for GDP data, and the UN Population Division for demographic data. We found that the total lost lifetime expected productivity (LEP) from lead exposure in 2019 was $906 billion, equivalent to 0.68% of world GDP. While this is a huge figure, it’s less than the $977 billion figure, equivalent to 1.20% of world GDP, that Attina and Trasande (2013) estimate using data from 2008.

​To test how well we reconstructed Attina and Trasande (2013)’s methods, we also set out to replicate their results using previous data. Selecting a subset of our data consisting of seven countries, we found that, on average, our replicated results came within 10% of the original results, with no result more than 20% different from the original. Some of the discrepancies were likely due to retrospective revisions of GDP and population statistics, while others may be explained by mistakes made by the study authors when calculating average BLL.[4]For example, the calculation that Attina and Trasande work out for Argentina in their 2013 paper’s supplemental material may contain an error, which we detail in §2.4.2 of the companion document. That said, the relatively small average discrepancy suggests that, overall, errors are minor and our reconstruction and update of the study are reliable. 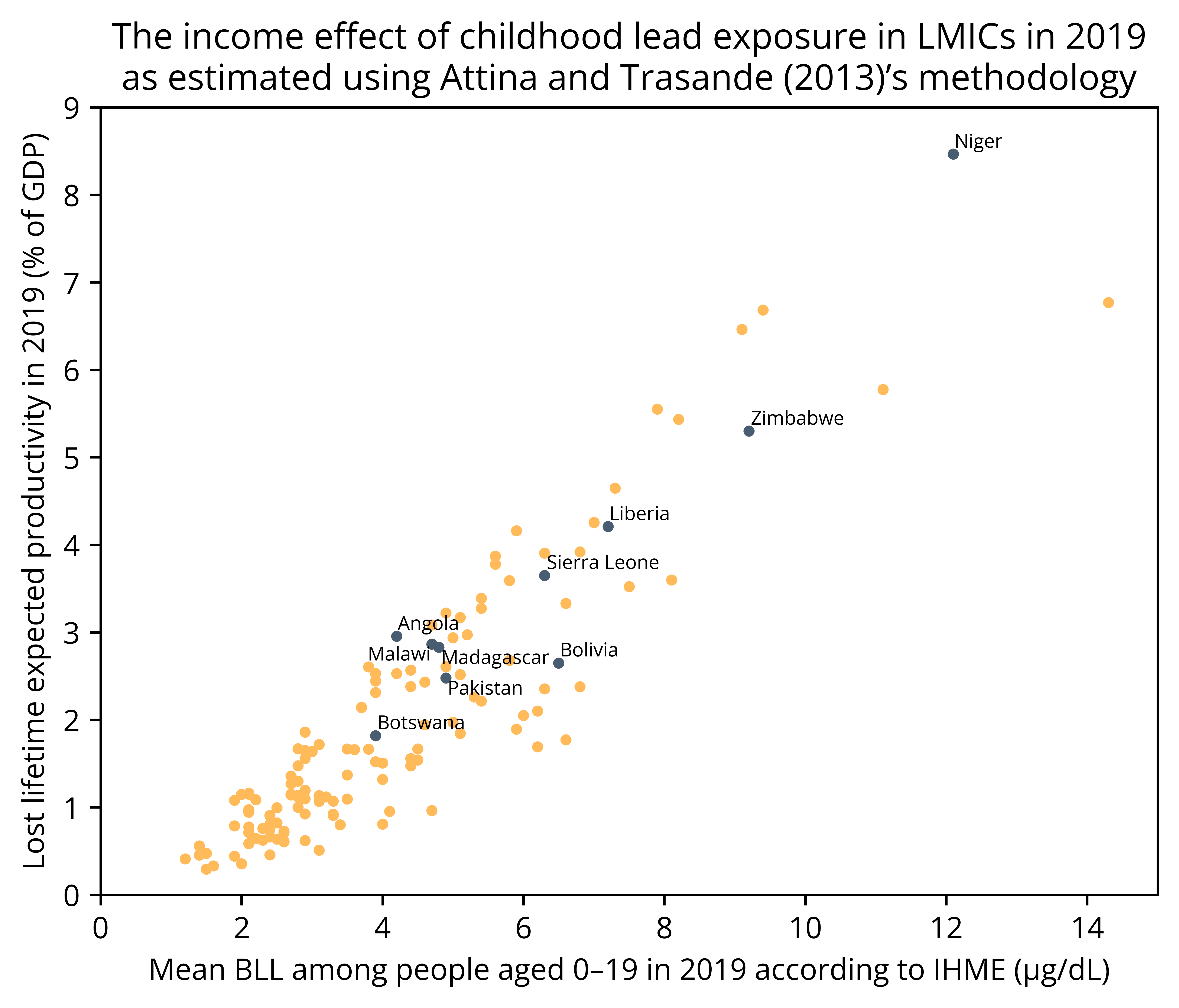 Attina and Trasande (2013) estimated the annual lost lifetime economic productivity of each low- or middle-income country (LMIC) using its mean blood lead level (BLL) in 2008. We updated their study using more up-to-date BLL data and national accounts statistics. Countries in which LEEP has run programs are plotted in blue.

The drop in total lost LEP from lead exposure – both in absolute terms, from $977 billion to $906 billion, and as a percentage of world GDP, from 1.20% to 0.68% – is very promising. And the absolute drop in lost LEP occurred despite positive GDP growth (i.e. an increase in total economic productivity) in most countries, reflecting an apparent drop in lead exposure – measured by BLLs – during the 2010s. The global phase-out of leaded gasoline, among the world’s greatest recent accomplishments in public health, has likely played a key role in decreasing lead exposure.

However, this finding should be taken with a huge grain of salt, because we’re highly uncertain about the BLL data that suggests a net decrease in lead exposure. We don’t fully understand IHME’s methodology for calculating country-level BLLs, but it has three probable features that cast doubt on its reliability.

First, it is based on little empirical data. The data are spatially incomplete: a 2021 review by Ericson et al. reported that two-thirds of countries had zero recent BLL studies. Consequently, researchers have had to extrapolate from neighboring countries or impute missing data based on the timing of the phase-out of leaded gasoline, thus ignoring other sources of exposure. The data are also temporally fragmented, with reliable longitudinal tracking rare at the national level.

Second, methodological differences between IHME and Attina and Trasande (2013) in calculating BLL make it difficult to draw conclusions about the extent and direction of change. Using a methodology different to both IHME and Attina and Trasande (2013), Ericson et al. (2021) reported significantly higher BLLs than IHME on average, further demonstrating the high level of uncertainty in current BLL estimates.[5]Ericson et al. (2021) provided calculations for 33 of the world’s 138 LMICs, per the World Bank’s 2020–21 definition. (We exclude Ericson et al.’s 34th country, Romania, because it was … Continue reading As shown in the figure below, the uncertainty in BLL generates uncertainty in the size of the income effect. 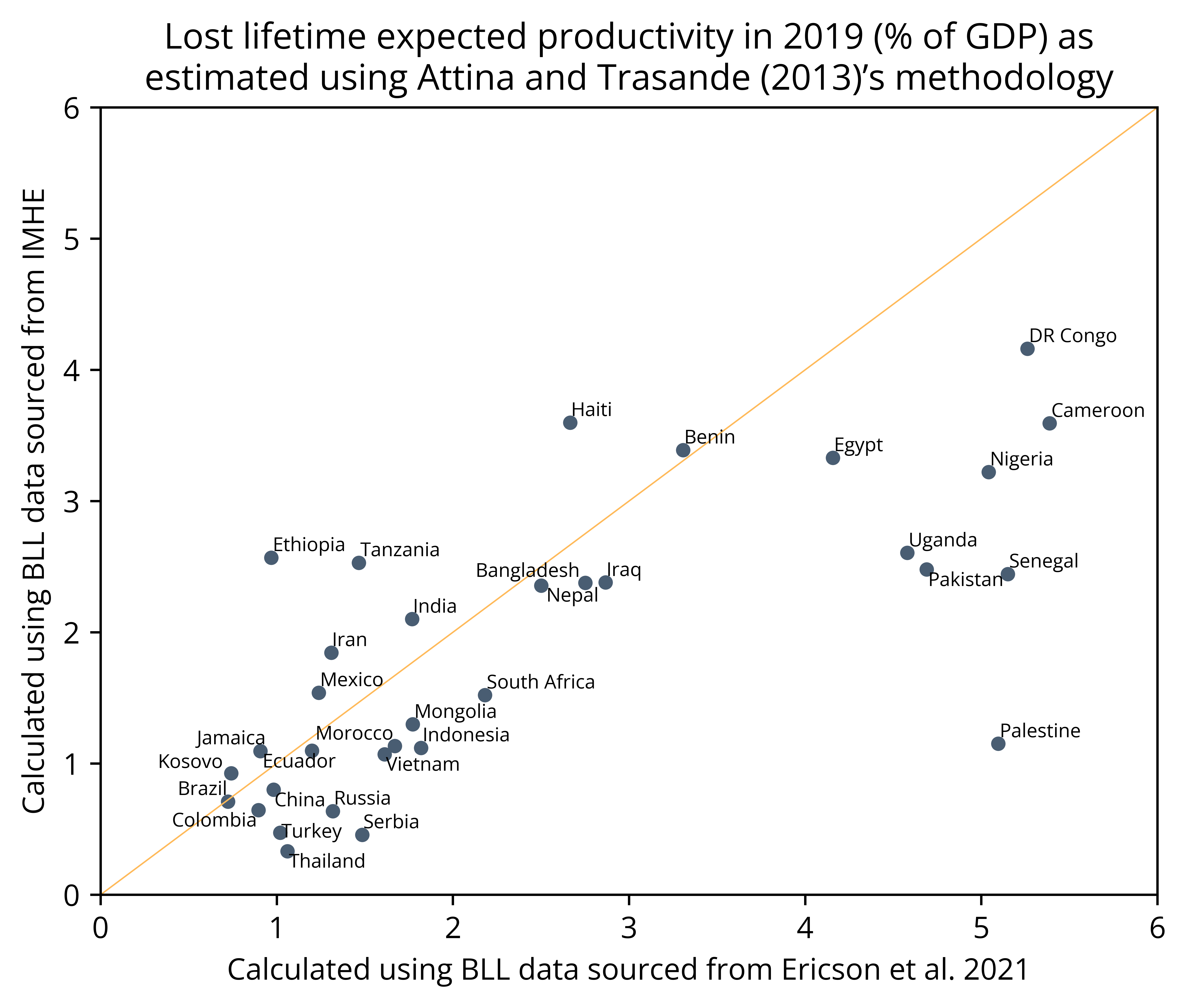 Using different sources of BLL data, we sometimes obtain drastically different estimates of lost lifetime economic productivity. This figure was inspired by a similar figure in a Center for Global Development blog post.

Lastly, IHME’s country-level BLL results for 2019 are not actually published, making it difficult to judge their quality; we sourced them from a website published by Pure Earth in its capacity as Secretariat of the Global Alliance on Health and Pollution.

The bottom line is that we are uncertain whether and, if so, to what extent the apparent decline in children’s BLLs is real. But as we’ll see, even assuming the decline is real, it’s not clear what this means for LEEP’s programs.

What this means for effective lead exposure elimination

Unfortunately, there is little information to indicate the extent and reasons for any decreases in BLL and about the effectiveness of specific interventions. For example, while exposure to lead from gasoline has likely declined, we don’t know much about the extent of exposure due to other sources, or how this is changing. As shown below, the phase-out of leaded gasoline worldwide is complete, but many countries have yet to enact legally binding regulations on lead paint.

More research will be necessary to spur more effective action. We think BLL studies are a natural place to start, and LEEP is currently advocating that USAID include BLL testing in its Demographic Health Surveys Program. BLL studies are needed to obtain an accurate picture of how severe lead exposure is, as well as which countries have the most pressing need for lead exposure reduction efforts. Another important line of research, which the Center for Global Development has received a GiveWell grant to pursue, seeks to clarify the relationship between lead exposure and earning outcomes in LMICs.

Only when we begin to gather and analyze data more effectively will we finally be able to tackle the challenge of lead exposure with the precision – and vigor – that children worldwide deserve. 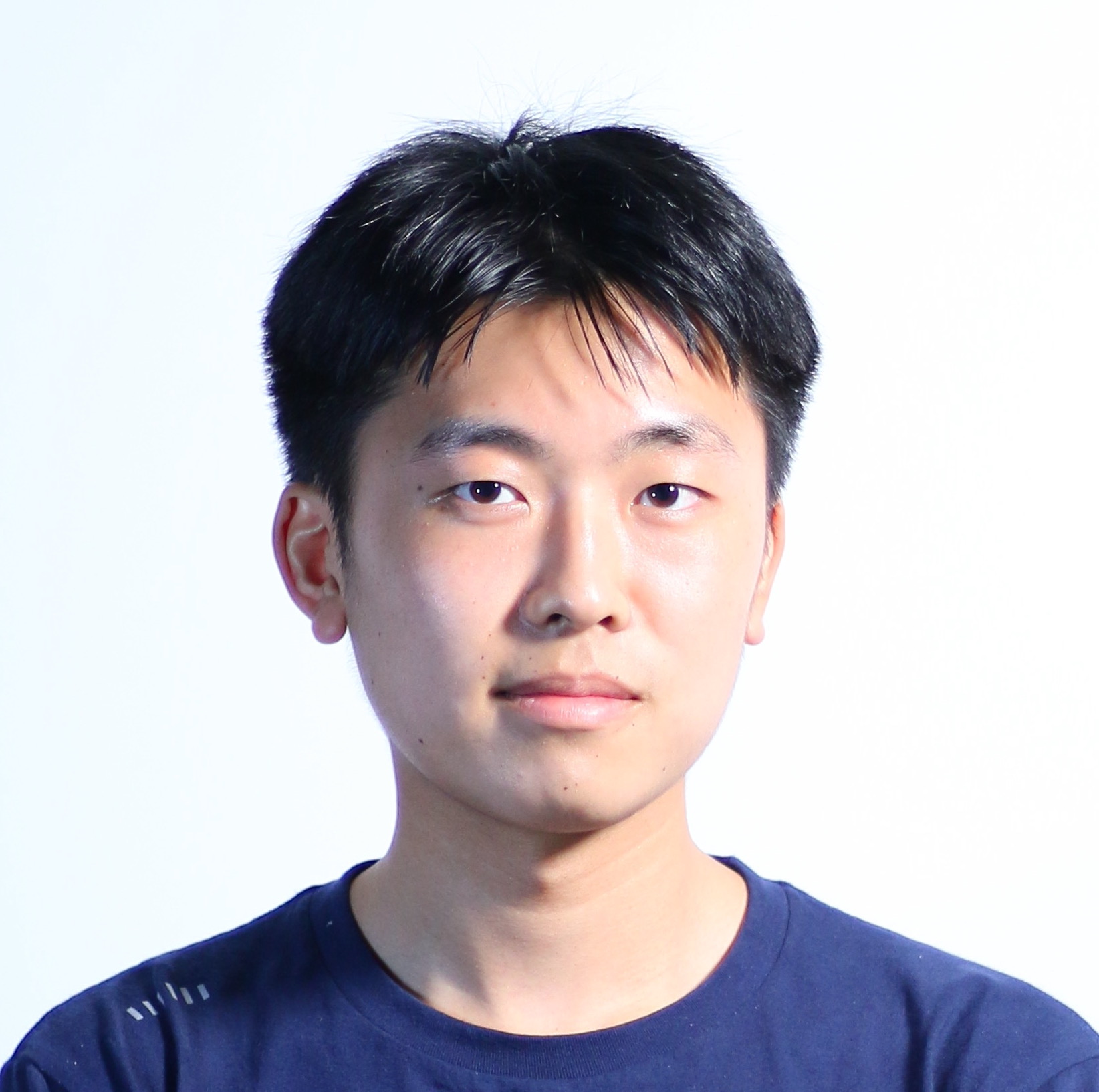 James has interned at LEEP since September 2021 and is an incoming research assistant on the Global Health and Development team at Rethink Priorities. He recently graduated from the University of Chicago with a B.S. in Environmental Science, and has done research on lead pollution at the Marine Biological Laboratory in Woods Hole, Massachusetts. He can be reached at y.james.hu@outlook.com.